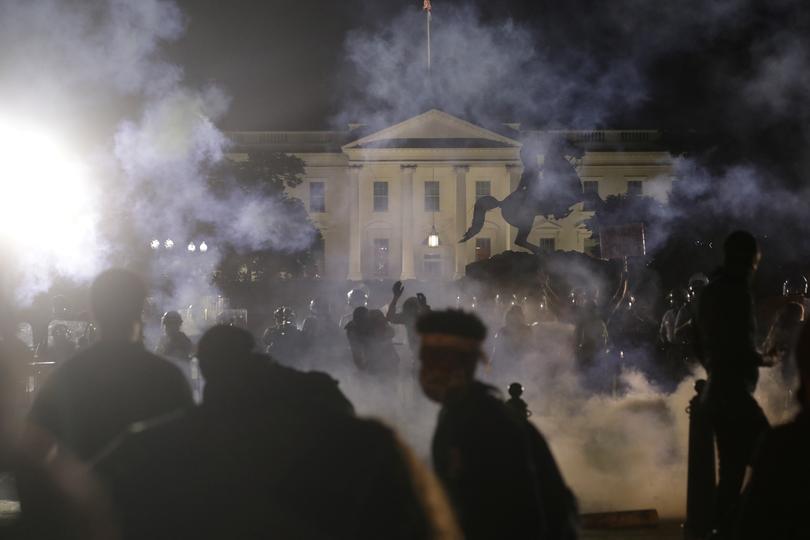 A handful of rich mercenaries trained by CIA appeared last year in Western media announcing that they have overthrown the government in Venezuela. Although they had almost no support in the country, their overthrowing has been represented in the West as a massive people’s democratic revolution. Most of the Western governments have recognised them as a legitimate governing authority without delay, and even helped them by illegally robbing the official Venezuelan authorities of their foreign assets. USA also almost engaged in a suicidal military operation in order to occupy Venezuela and install their puppet government.

On the other hand, in the last few days millions of people have been participating in one of the largest social uprising in the history of the USA. These rebels are mostly descendants of slaves and poor working class that have built the country. Even centuries later the USA cannot accept them as equal citizens. What’s worse, it is because the state and its repressive apparatus kill people on a massive scale and with impunity that these people have flooded the streets. And how is this gigantic and democratic movement represented by authorities and media? Not as an uprising of those racially discriminated against and forced to defend their lives. But as rioting and looting.

It does sound weird, doesn’t it? The European Union often supports protests in foreign states, imposes sanctions, changes regimes, and conducts military operations. Sometimes (as in Bolivia) it even supports military juntas, allegedly in order to „save democracy“. And now, when it is really faced with a massive democratic movement and a brutal racist repressive system that suppresses the democracy movement in blood, arresting journalists that report on it, suddenly we cannot hear a word from our European democratic champions.

As they have been somewhat reluctant to act, here are some of the measures that we could suggest to the EU if it really wants to „defend democracy“. All of the measures have already been used earlier against other countries so we don’t expect them to be problematic:
1) Immediately introduce military and economic sanctions against the representatives of the authoritarian US regime and confiscate its assets abroad until democracy is introduced there. That’s what the EU has already done to some of its rivals, allegedly with the sole purpose of defending democracy.
2) Declare Donald Trump removed from office and recognise as a president one of the distinguished dissidents. We suggest a political prisoner from the former Black Panther Party Mumia Abu-Jamal as a good candidate as he has been unjustly in jail for almost 40 years.
3) Send weapons to the rebels. Croatia and Serbia have already sent weapons to rebels in Syria back in 2012, in coordination with the EU, US and Saudi Arabia. Most of it later ended up in the hands of ISIS and was used in genocide against the Kurds, Christians and others. What better way to redeem ourselves than to send weapons to real fighters for democracy that are at the moment fighting the armed forces of the brutal US regime?
4) Finance a peace mission that will establish a provisional administration composed of oppressed groups. This mandate could be given jointly to regional actors such as Cuba and Venezuela that already have a lot of experience in eradicating racial and social inequalities. Their military control of the US could do the country a lot of good.

As the EU is a „pillar of struggle for democracy and against repressive regimes“, we see no reason not to accept these suggestions. Except, of course, if all this talk about the Western struggle for democracy is just a thin veil that is supposed to cover the real policies of the US and the EU that have everything to do with imperialism and profit interests of the capital but nothing to do with any sort of democracy.